TEMPLE – Taking precautions for flooding during the worst drought in Texas history may seem unrealistic, but for a reality check, all you have to do is look at what happened in the Temple/Belton area in 2010.

Dr. June Wolfe, a Texas Agrilife Research scientist based in Temple, was been asked to do just that by local city officials after the flood. The result an automated weather station that sends text alerts to authorities to possible flooding of low-water crossings and danger to local communities.

“Fort Hood and the Temple area are in what’s known as Flash Flood Alley,” Wolfe said. “The result was flooding that not only submerged low-water crossings, it flooded bridges and downtown Belton.”

Local communities were reminded of this in September 2010, when Tropical Storm Hermine brought from 7 to 8 inches of rain in less than 12 hours. No lives were lost during the 2010 flood, but Nolan Creek, which runs through Belton, turned into Nolan River.

The newspaper of record, the Belton Journal, reported on Oct. 1, 2010, that “a total of 289 total structures were impacted in some way. Of that figure, 29 residences were destroyed, 45 sustained major damage, 56 had minimum damage and 149 were affected.”

Those figures didn’t include submerged cars, and damage done to parks and streets. One report posited that the reason there weren’t more vehicles lost – or lives – was that the flood occurred in the early morning when there weren’t many people on the roads.

When approached by Belton city officials, Wolfe and his research assistant, Tony Owen, had years of experience dealing with automated flood-monitoring on the Fort Hood reservations. The Flash Flood Alley region stretches from San Antonio through Austin and to Dallas, also includes the Fort Hood military base, Wolfe said.

Fort Hood comprises more than 300 square miles of Central Texas, and it has many unimproved low water crossings. The U.S. Army was concerned about the historic loss of equipment and lives, both by civilian employees and military personnel on “tactical and paved” roads during flash floods. 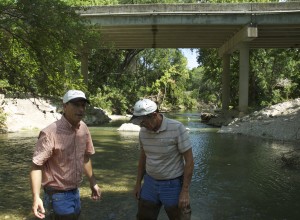 Dr. June Wolfe, Texas AgriLife Research scientist (left) and Tony Owen, AgriLife Research associate, check placement of a sensor for an automated floodmonitoring system on Nolan Creek, about 6 miles west of Belton. At the time of a flash flood in the fall of 2010, the creek level rose to above the bridge behind them in a matter of hours. (Texas AgriLife Extension Service photo by Robert Burns)

Young recruits might feel invulnerable in a 70-ton Abrams tank, but the tanks don’t float in 10 feet of water, Wolfe said.

Wolfe’s work with flood monitoring occurred serendipitously in 2002, when he was project manager for a water-quality study at the fort. The region is prone to severe soil erosion, and purpose of the study was to monitor sediment levels in rivers and streams with data logging devices. When a military team was inspecting the loss of a tank and crew at a low-water crossing, they learned that Wolfe’s sediment data loggers also had records of stream depth and flow at the time the accident. Consequently, Wolfe began working with, Jerry Paruzinski, a program director at the for, to develop a warning system.

The result was a linking of cell phone technology to existing sediment monitoring systems at major watershed overflow points throughout the reservation, he said.

“We simply installed cell phones in dataloggers at three low-water crossings and programmed them to call when the stream depth was unsafe to cross,” he said. “When water began to rise, the automated system would send voice alarms to range control officers,” Wolfe said.

The system worked but had limitations because it was piggybacked on the sediment-monitoring program, and due to the cell phone technology of the time, according to Wolfe.

The problem was that the analog phones and data loggers only issued a recorded, “robot-like, message stating ‘alarm at site 3; please acknowledge,”‘ Wolfe said.

Everything still worked if range control personnel understood who or what was calling them, where site 1, 2, or 3 was, and were trained to acknowledge the alarm by entering a code, according to Wolfe.

“This worked well enough if you could keep the soldiers on-duty at range control briefed about the system,” he said. “Another problem, they frequently rotated personnel, as the military likes to do.”

In 2007, digital cellular phones became available, he said. The new phone systems were more reliable, made real-time monitoring possible, and communicated with Range Control is a much less cryptic manner, Wolfe said.

When the programming determines flood conditions are eminent, text alerts are relayed to a list of range control personnel. The Range Control officers can then immediately warn units on maneuvers or civilian traffic control officers of dangerous stream conditions.

Real-time water level measurements for all six Fort Hood sites can be found at /decision-aids/flood-alert-system.

“It all depends upon funding, of course,” Wolfe said. “But when you figure the cost compared to the loss of an Abrams tank – not to mention the loss of a life – it’s very economical.”

The system Wolfe installed for the City of Belton is basically a scaled-down version of the Fort Hood network. Because of limited funds, it currently only uses one monitoring site on Nolan Creek about 6 miles west of Belton. Similarly to the Fort Hood system, monitoring system data is updated every 10 minutes to the Internet server, and alerts are sent to local officials and emergency personnel if flooding is eminent. Like the military stations, the website is available to the public and can be found at http://fthoodflood.tamu.edu/NolanCreek.jpg

There’s also the cost for maintaining a server, but the one for Belton is gratis on another project.

“The real cost is in salary for the person installing and maintaining the system,” Wolfe said.

For more information on the flood-monitor systems, contact Wolfe at 254-774-6016, jwolfe@brc.tamus.edu.