Ten happy kids in bright yellow T-shirts scampered among the vegetable rows Wednesday, wetting down the thirsty seedlings coming up out of the soil.

They carried a long hose from a portable water tank on wheels supplied by the Grassland Soil and Water Research Laboratory.

The children, all chirping at each other like so many happy crickets, are part of a club called Un-included. They are  learning self-reliance, self-identity and practical skills so as not to follow a pack mentality that gets some young  people into trouble, club leader Garfield Hawk III said.

Un-included is Hawk’s brainchild. He coined the term and secured a Web domain to promote it. Then he had yellow T-shirts printed that say, “I want to be Un-included when it comes to drugs, alcohol, teen pregnancy and gang violence.”

Hawk is helping to raise kids who might otherwise be turned loose on the streets in his neighborhood on Avenue D. And for anyone who challenges him about broaching such controversial subjects because they are too young, Hawk has a ready answer.

During the summer, Hawk keeps the neighborhood busy with field trips.

“We had 10 kids out today,” he said. “We had 20 yesterday. This morning we went to a movie, then at noon came to water the garden.”

He said they went to see “The Karate Kid.” “It had some positive messages for them,” he said.

Dr. Mari-Vaughn Johnson, a research agronomist in charge of educational outreach for the USDA Agricultural Research Service, said she first talked to Hawk about contributing her time working with the children as an individual doing community service.

“Then we talked about a garden and I thought, ‘Hey, part of our mission is agricultural outreach.'” 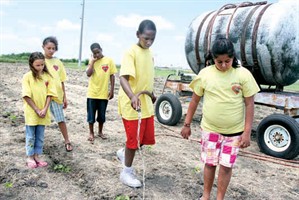 Children in the Un-included Club water tender plants that have peeked above the ground in a garden space donated by the U.S. Department of Agriculture Research Station in East Temple. The club engages young people in wholesome activities and teaches them to “un-include” themselves from a crowd mentality. –Photo by Harper Scott Clark

She said she got authorization for the kids to grow a garden on a plot of federal land across from the Blackland and Grasslands Research Center.

“We wanted to get them involved in what agriculture is really about, what it is, what it does and how much a part of everyday life it really is,” she said.

“So many people think an apple just comes from Walmart,” she said, laughing. “It’s more than that.”

Hawk said the break it gives the kids is unique.

“It’s not always about how much money you can contribute,” he said. “This is about an opportunity for the kids that  is positive. It teaches them teamwork. And it teaches them where vegetables really come from. They don’t just come out of a bag from the H.E.B.”

Hawk said the children would work on a float today that they will ride in the Juneteenth Parade on Saturday.

“The parade begins on Martin Luther King Boulevard and ends at Ferguson Park at 24th Street and Adams,” he said.

“That will be a positive atmosphere with lots of people getting together for barbecue.”

Renita Naylor, a volunteer, said the planned activities are so much better than sitting in front of a television or computer.

“And it’s being able to get them near nature that God has given us,” she said.

Johnson said she watched the children working in the garden Tuesday and noticed a level of communication between them that amazed her.

“They are more functional than a lot of families because they work together,” she said. “I felt like I had been to a party yesterday morning. It was so much fun. I felt good all day long.”

Johnson said the garden project is something she hopes will not just grow over one season but that will continue to grow over time.