Nearly 100 guests helped blow out the candles at a birthday party for an esteemed Temple institution Monday.

Visitors toured a dozen exhibits and visited with scientists who explained their ongoing research projects and programs.

The center’s projects improve water quality through monitoring and analysis, restore training lands at Fort Hood, monitor water quality and flooding at Fort Hood, and use computer simulation to improve land and water management for local farmers and ranchers as well as for the international community.

Also nearing the century mark was rancher Wilson Moon, 98, of Temple. The oldest person at Monday’s event, Moon said it felt great to be a part of the celebration.

He said while he was in high school in the 1920s he attended competition events at Blackland Center.

Then his first job was at Blackland after earning his bachelor’s degree in agricultural science at Texas A&M in 1935.

“I worked for the U.S. Department of Agriculture Soil Conservation Service in Temple,” Moon said. “I was assigned to a project at Blackland when Dr. Geid was the superintendent.”

Moon said he used a shovel to throw soil that had run off the terraced fields. Then he measured the runoff.

“Runoff would collect in a vat,” he said.  “The project was to measure the effects of terracing to control erosion.” 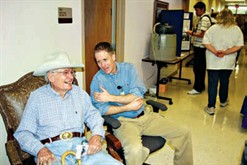 During his 40-year career, the Soil Conservation Service sent him to Indiana, Iowa and 13 other states where he worked with projects in partnership with the U.S. Army Corps of Engineers, Moon said.

Moon said he still actively ranches at a spread down in Holland.

Zoe Rascoe, spokeswoman for Blackland, said it was chartered in 1909. Temple was selected as the site in 1910. Groundbreaking began in 1911 and the center opened in 1912.

“We have a broad spectrum here and a lot of people translating the research into practical applications,” she said.

Among the things the center monitors are effects of agricultural practices on natural resources and the environment, monitoring and management of rangeland drought, managing urban storm water and developing watershed protection for healthy rivers and streams.

“We are better known internationally than we are here locally,” Rascoe said. “People come here from all over the world.”

Moon said the results of research shared with local farmers and ranchers have been invaluable to them. “It’s not that highly publicized, but they do pick up on these ideas.”