For more than a century, scientists have trod the sod – 172 million acres over 254 counties. The final hole has been dug, analyzed, inventoried and made available online. The first phase of Texas’ soil survey  that  started  111  years ago is complete. Temple will be the site of the state’s symbolic “final shovelful.”

What began in 1899 in Montgomery County as the first soil survey in Texas will culminate in a symbolic “last acre” ceremony hosted by the Natural Resources Conservation Service on Wednesday.  Several hundred dignitaries will converge in Temple for the ceremony and open house. A monument will be dedicated at the “last acre” ceremony.

Completion of all 254 counties is a tremendous milestone, said Dennis Williamson, Texas state soil scientist for the U.S. Department of Agriculture’s NRCS for Texas, headquartered in Temple. At the center of the massive  soil  survey project  is Williamson,  who  oversees  60 soil scientists stationed in nine regional offices throughout the state.

Formerly called the Soil Conservation Service, NRCS is the federal agency that works with land users to help protect, conserve  and  manage  natural  resources, such as soil, water, air plants and animals.

NRCS left no stone unturned in Texas. The state’s soil survey is part of a nationwide project initiated  to  sample,  document and catalogue every acre in the nation. About 95 percent of the nation is completed. Even the grounds of the White House in Washington,  D.C.,  have  been analyzed.

Texas is one of the largest and most challenging states for soil scientists with 1,300 different soil  types.  Central  and  East Texas soils are generally more diverse and complex than West Texas’ expanses.

Soil is the basic staff of life for  a  multitude  of  personal, business and agricultural enterprises. Soil  surveys are used by city planners,  farmers,  ranchers,  developers,  construction companies,  teachers,  realtors –  even  homeowners  and backyard gardeners.

Soil survey maps have been available  for  many  decades. The  first  Texas  survey  was published in 1902 in a U.S. Department of Agriculture report. It consisted of 12 pages of text and five mapping units within an area of 137,000 acres.

In  earlier  times,  the  maps were  printed  on  large  sheets about  the  size  of  a  card  table top. The Temple Public Library has several published over the past century. Those early maps are gold mines of historical information about long-dissolved communities, rural cemeteries and  land  features  now  disguised by urbanization.

However,  information gleaned from them was cursory because  early  20th-century knowledge  and   survey  tools were primitive. “A lot of those early surveys were done on the ground  with  guys  setting  up plane  tables  in  a  pasture,” Williamson added.

Early soil scientists measured the ground with a horse-drawn buggy. They would  tie  something to the spoke of the wheel and  count  the  revolutions  to obtain  an  accurate  measurement. First automobiles, introduced  into  the  field  work  in 1919,  lacked  odometers.  So, the  soil  scientists  would  pull the buggy behind the automobile to measure the land. Then, they tried mounting the buggy wheel onto the side of the auto. This was fairly successful unless the automobile made sharp turns and skidded. Finally, the scientists added newly developed odometers to the autos.

The  survey  continued  over the next century, in stops and starts as funding was available and technology improved. 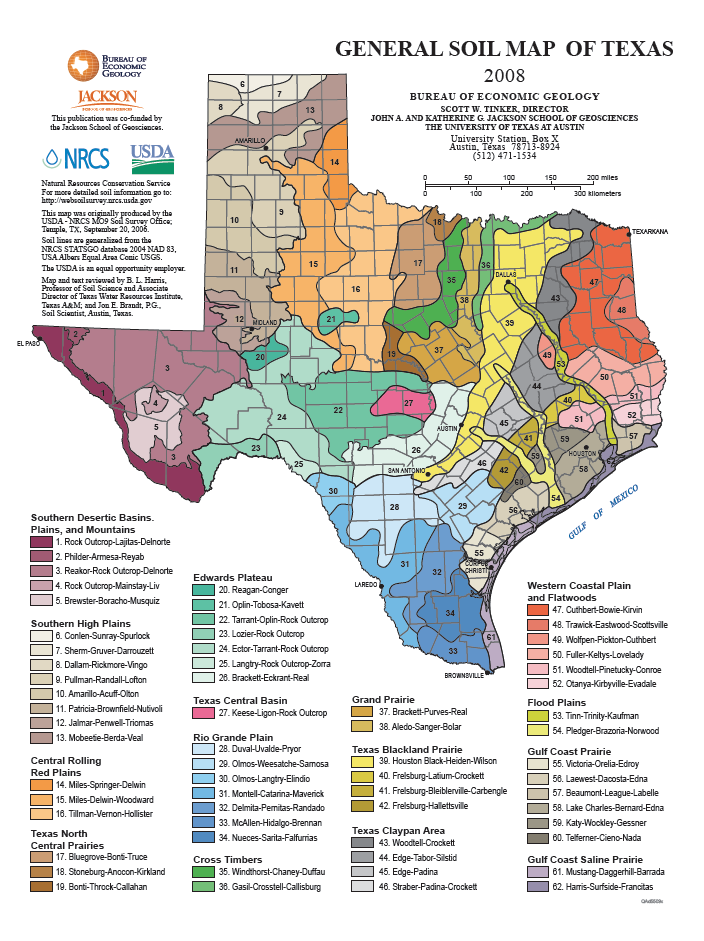 Survey  crews  in  the  beginning  targeted  the more populated counties or regions with strong agricultural economies. Bell and surrounding counties were among the earliest studied. The least populated counties, such as sparsely populated areas in West Texas, were the last to be surveyed. The actual “last  acre”  is  on  private  land between  Van  Horn  and  Dell City in Hudspeth County, population 3,115 and located immediately east of El Paso.

“It’s  not  that  those  counties weren’t  important,” Williamson said. “It’s just that, at  the  time,  the primary  land use  was  not  as  intensive  and the counties were sparsely populated.”

In  all  cases,  soil  scientists take  general  inventories  of each county. They contact the landowner  for  permission  to dig samples and map the soil. The  scientists  take  numerous samples  because  not  all  soils are alike; one pasture can contain several different soil types.

“Normally you’ll  find 40 to 50 different soil types in every county,”  Williamson  said. “Using aerial photography, we record where the different soils occur  on  the  land.  Then  we take all  the  information, send samples  to  the  laboratory  or test it locally. We analyze how much sand or clay is in the soil, also the amount of lime and the pH, or acidity, of the soil,” he added.

As they walked or drove vast expanses of the state, soil scientists described and sampled soils,  then  sent  them  to  the Texas  A&M  University  and Texas  Tech  University  Soil Laboratories  as  well  as  the NRCS  National  Soil  Survey Laboratory  for  further  analysis.

Once those analyses are finished, soil scientists draw conclusions from the results found in the test site, creating a crazy quilt of polygons and swirling shapes  across  the  map’s  terrain. This  aggregate  yields  a mother lode of information.

“We can determine soil capability for septic  tank systems or building homes. These maps are  helpful  to  determine  the best  location  for  roads  or buildings, planting gardens or deciding what type of crops to plant and how productive the land will be. Ranchers use the maps  to  decide  how  many head of cattle they can run on their acreage, depending on the soils productivity,” Williamson said.

“The  soil  resource  is worth billions and billions of dollars. In  recent  years,  maps  have been digitized and put on the web where everyone has free access. Think how  important soil  resources  are! This  year alone, Texas soil produced $25 billion  in  agricultural  products,” Williamson said. 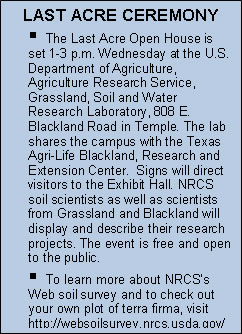 “Even  though  Texas’  soil maps are finished, NRCS will continue  to  maintain,  update and refine the  survey areas in the coming years,” Williamson said. The information obtained from the fieldwork is  available to the public.

NRCS  makes  soil  surveys and  maps  available  on  compact disks or on the Internet.

NRCS  soil  scientists  were aided  by  other  USDA  agencies,  Texas Agri-Life  Extension  and   Research,  several Texas  universities,  the Texas State Soil and Water Conservation Board and local soil and water  conservation  districts that provided funding, personnel, soil analysis and research along the way.

One Response to After 111 years, soil survey complete