A bumpy beginning for the Blackland Experiment Station

Acrimony between cities? Backroom deals? Blatant commercial boosterism? Cold cash upping the ante? Oh, and then there was the matter of $2,500 bonus money.

The story of how Blackland Experiment Station came to be located in Temple in 1909 involves a year of wrangling and dealing lubricated with financial incentives.

In November 1908, Judge Edward Reeves Kone (1848-1938) became the new director of the Texas Department of Agriculture with stern expectations from the Legislature. According to a 1914 biography, Kone was told, “unless the department met expectations, it would be abolished at the next session of the Legislature’s declining to make an appropriation for its support.”

Texas had three experiment stations — College Station, Troupe and Beeville. However, the Legislature appropriated fewer funds each year to keep the stations going.

Kone plunged into the job with “a vigorous, courageous and determined exertion.” Beginning with the opening legislative session in January 1909, he buttonholed politicians to increase allocations. Working with key legislators, Kone proposed a network of state agricultural experiment stations in strategic locations. An agricultural board would  be given wide latitude to create and govern the sites. By April, the Legislature approved the plan and allocated nearly twice the funds than previous years. The agriculture board announced it would approve four stations. By February 1909, legislators announced five stations would be opened: the Blackland belt, the East Texas sandy belt,  the Panhandle, Central-West Texas and West Texas.

Seeing financial boons, more than a dozen cities began vying, including Temple. The state required that each city/county would present proposals, secure the land and offer cash advances to start building the stations.

Many cities dropped out of contention because they couldn’t secure the money or the land. By September 1909, the other sites had been determined, but members remained deadlocked over the five cities seeking the Blackland station. 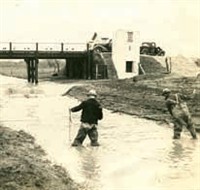 Scientists with the U.S. Department of Agriculture began collecting hydrologic data such as rainfall, evaporation, runoff and soil erosion in 1937. –Courtesy of Blackland Research Center

Debates and meetings continued until Dec. 6, 1909, when the committee announced the two Blackland finalist cities were Temple and Denton. Each city’s business and political leaders launched intense campaigning during the Christmas season.

The agriculture committee gathered again on New Year’s Day 1910 in Austin for the final decision. Denton and Temple newspapers covered the event in full.

Temple sent a delegation of prestigious citizens to plead their case, which included 100-acre tract about 1.5 miles north of downtown and a $5,000 bonus above the earnest money to set up the station.

Kone and the lieutenant governor were committed to Temple. Denton upped the ante to $7,500 bonus outright, “whereas Temple and the board looked a bit blank,” the Denton Record-Chronicle reported.

Kone waffled, saying the proposal could seal the deal in Denton’s favor. When Kone stepped out of the room, the board decided to accept both cities and their cash offers.

However, the deal was far from done. The victorious Denton delegation complained. “It was not fair, they urged, for the board to discriminate and charge Denton $7,500 for the same thing that Temple was getting for $5,000,” the Denton paper reported.

In a goodwill gesture, the board agreed that each city would pay a $5,000 bonus.

But the arguing was not over. By the next month, the city of Belton objected to the station site in north Temple. Belton citizens wanted the station to be located south and midway between the cities. By late May 1910, a site was secured along what is now Midway Drive and construction began.

Early in 1911, representatives from each city’s commercial clubs (early names for Chambers of Commerce) held a joint fundraiser to raise the $5,000. The Temple Daily Telegram was effusive in its description of the meeting: “This will be the first time in the history of the two towns that such a move has reached the point of acceptance, and such a session of these two clubs will inure to the benefit of both towns and Bell County.”

By February 1911, the two cities kissed and made up, in a municipal sort of way. “Hatchet Is Buried and Peace Prevails Between Two Towns,” proclaimed the Feb. 25 issue. The Telegram reported, “What was probably the greatest ‘love feast’ ever participated in between Temple and Belton people was pulled off last night, under the auspices of the Temple Commercial Club …”

Ultimately, Temple, Belton, Denton and the state were winners in the deal. Kone became the hero of Texas agriculture. “The funds [to establish stations] were so wisely handled that the people were given twice the number, resulting in a great benefit to every part of the state,” according to his 1914 biography.