The man behind the models: Engineer spends career building programs to help producers

March 20, 2008 – In the “don’t judge a book by its cover” category is Jimmy Williams, a research scientist at the Blackland Research Center in Temple. If there is such a thing as your typical Ph.D., Williams flies in the face of that stereotype.

Though he is respected by his peers across the nation as a leader in agriculture research, primarily because of his pioneering work with computer modeling programs, Williams remains close to his roots, both professionally and geographically. He grew up on a farm in Falls County and still lives on a farm there, where he raises cattle.

“My dad was basically a cotton farmer until the drought of the 50s sort of put us out of business and we went more into cattle,” he said. “I was involved with FFA and all that kind of stuff.”

Today, when he isn’t troubleshooting some of the computer models he helped develop or assisting other researchers with their work, Williams, 67, can still be found working his Falls County land. He worked for the Agriculture Research Service for 31 years. He retired from that agency on a Friday and went to work the following Monday for what is now known as Texas AgriLife Extension.

Williams said he wasn’t sure he would stay involved with agriculture or agriculture research his whole life but he knew from a young age that he would attend Texas A&M University. He took all the math and science courses that he could in high school but wasn’t sure what he would study until the decision was more or less made for him. 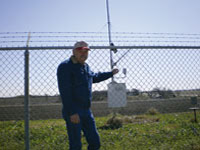 Jimmy Williams has spent his career building computer models related to land management and conservation. Currently stationed at the Blackland Research Center, he began his career with the Soil Conservation Service (now NRCS) before taking a job with Extension. Williams said his father was involved with agriculture and he became involved with FFA, which led him to Texas A&M Unversity to study agriculture engineering. –Staff photo by Coppedge

“When I got into high school and FFA, I went to the Houston Livestock Show with some calves I was showing down there that I had won in a calf scramble,” he said. “They had a contest with record-keeping and all that kind of stuff, and I had to write an essay. I won a scholarship for $2,500 to A&M. That money had to be used to study some part of agriculture. So that narrowed my decision down quite a bit and I decided to go into agriculture engineering.”

After graduating from A&M in 1963, Williams took a job with Soil Conservation Service (now the Natural Resources Conservation Service, or NRCS), where he had worked as a trainee between his junior and senior years of college. He went to the experiment station at Riesel in 1965.

Williams worked in the areas of hydrological development, sedimentation, and flood routing at Riesel, working with data that had been collected at the station since 1938. The studies were begun at Riesel in reaction to the soil erosion crisis of the 30s.

All of Williams’ work at Riesel in the early days was done with a calculator and a slide rule. Researchers were using a computer even then, but there was only one computer available to him and that was on the A&M campus. Williams was taking post-graduate courses at A&M when he started working on that old computer. He didn’t know it at the time but he was on the ground floor of the technology boom.

Williams transferred to Temple in 1973 where the computer modeling programs blossomed from single event models to the comprehensive models of today.

The models currently supported at Temple are best known by their acronyms (SWAT, ALMANAC, EPIC and APEX) and work on spatial scales that range from individual fields to entire river basins. The work has come a long way from calculators and slide rules.

Passage of the Soil and Water Resources Conservation Act in 1977 directed the secretary of agriculture to appraise soil, water and related resources and their conservation on agriculture land as a tool in policy decisions and as a way to protect natural resources. The EPIC (Erosion-Productivity Impact Calculator) was developed as a result of that initiative.

As the technology has developed, one model has led to another with more capabilities and different objectives. Today many of those models are used to justify conservation practices included in the farm bill and to assess troubled watersheds.

Williams believes that ag producers can benefit from the models by using them to make management decisions such as determining land use and fertilizer rates but, he said, the models will help producers the most with longterm decisions.

When asked about the most satisfying part of his four decades of research, Williams said he likes the fact that the models are being ran and put to use.

“You can work your whole career in these tools and nobody uses them then that’s not very satisfying,” he said. He added that working closely with NRCS has helped put the computer models and conservation practices he and other researchers have worked on to use.

“I think we will see more and more of the computer analysis. I think farmers and ranchers will become more sophisticated in terms of the decisions they make,” he said. “Right now there’s the biofuels thing with producers selecting different energy crops and trying to decide whether or not to go that route. There’s a lot of different decisions that farmers and ranchers will have to make that these models can help.”