April 3, 2008 – When what is now known as the Natural Resources Conservation Service (NRCS) was founded in the 1930s as the Soil Conservation Service, the first order of business was helping farmers and ranchers manage their land in a sustainable way in the midst and aftermath of the Dust Bowl. Families were leaving rural America in droves, defeated by the wind and dust and a dreadful farm economy.

Today people are moving into rural parts of the state and country in droves. Many of the issues and practices developed as a response to the Dust Bowl are still with us, but a burgeoning rural population brings new challenges for the NRCS and for people who make their living from the land.

Don Gohmert, 61, is the state conservationist for Texas. With the state’s population expected to double by the year 2050, he believes the NRCS has a vital if challenging role to play in the state’s populous future.

From Gohmert’s perspective, the future holds pitfalls for ag producers and newcomers alike. Land fragmentation, water issues, diminishing wildlife habitat and the challenge of feeding a growing state and country from farm and ranch land that is being reduced by the state’s increasing urbanization are some of the issues looming large in Texas’ future, he said. 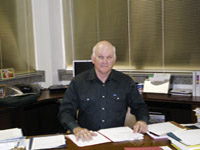 State Conservationist Don Gohmert, 61, said as the state continues to grow, resource conservation and the role of the Nature Resource Conservation Service will be important. “There are a lot of people moving to the country today who haven’t made their living off the land. They don’t know the conservation techniques or the technology that’s available to them,” he said. –Staff photo by Coppedge

While technology and the results of long scientific study are available today for landowners, many people moving to the country for the first time aren’t aware of it, Gohmert said.

“There are a lot of people moving to the country today who haven’t made their living off the land. They don’t know the conservation techniques or the technology that’s available to them,” he said.

“In a lot of cases they’ve just acquired the land. They have a lot of money. They think they want to build a lake out there so they go find a bulldozer, and they can do more damage to the land in one day than those farmers did in a lifetime.

“They don’t know that we as an agency exist to help them understand that the lake they want to build is impossible to build because it all sandy land. It won’t hold water; or it’s too erosive or the watershed is too big.

“Regardless, they end up with a dry hole out there. Then what do you do with something like that?” A simple call to the NRCS could have averted that scenario, he said.

“The real challenge that we see coming for us is the new folks moving from the city to the rural areas, becoming new landowners and not necessarily understanding the land and not knowing that there is assistance there for them at their request.”

The NRCS offers technical and cost-share assistance for landowners who want to use the best practices available to sustain and conserve their land. The technical assistance is free and, like all NRCS programs, voluntary.

Landowners who want to accelerate conservation practices on their land can participate in a cost-share program that pays a portion of the cost of implementing the practices. The landowner pays the rest.

One of the NRCS’ most popular cost-share programs is the Environmental Quality Incentive Program (EQIP) which is set up to provide a voluntary conservation program for farmers and ranchers. The NRCS wrote more than 28,000 EQIP contracts with producers statewide last year, Gohmert said.

Gohmert said that one thing landowners may be requesting more of in the future is water, but there may not be enough of it to go around if measures aren’t taken now to prepare for the water needs of a rapidly expanding population.

Gohmert, a native Texan from Cuero, has spent most of his career with NRCS in Arizona and Louisiana. He was Louisiana’s state conservationist when Hurricanes Katrina and Rita devastated much of that state.

Gohmert took over as Texas’ state conservationist in June of 2007, not long before historic floods ravaged North and Central Texas. Looking at the big picture, he said the state was growing and that the amount of productive farm and ranch land was diminishing in direct proportion to that growth.

“We have vast agriculture resources, not just the land but the people we have in the research field, in the mechanization field and in the producers that we have,” he said. “We can feed 120-140 people with one farmer. But we’re losing the one ingredient that we have to have – the land. Urbanization is taking the best of the land, the prime farm land in this country.”