Broken river: What’s around the bend?

On a hot and humid May afternoon, 11 men crowded into U.S. Rep. John Carter’s Temple office. Carter’s deputy chief of staff, Jonas Miller, arranged armchairs in a horseshoe, their backs against the wall.

Landowners with photographs of river erosion, a county judge, a sheriff and four U.S. Army Corps of Engineer officials with stacks of folders tucked under their arms sat elbow-to-elbow. Someone cracked a joke about the pistol strapped to Milam County Sheriff David Greene’s hip – an icebreaker to ease possible tension between the groups.

Seated behind his desk, Miller addressed the men.

“I know these are emotional issues,” Miller said. “It’s important to get everybody in the same room all at once and have open discussion.”

For about two hours, the conversation meandered like a river with multiple tributaries. The men weighed in on riverbank restoration, eminent domain and the Corps’ methodology for releasing lake water.

Representing the Corps, chief of reservoir control Paul Rodman explained their decision-making process. He said they coordinate information from upstream and downstream to gauge when and what rate they release water. 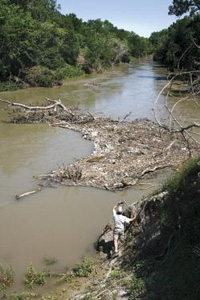 “We look at the historical record and we look at the channel capacity downstream to decide what kind of releases we can make,” Rodman said. “We have a staged release pattern to limit the releases to 3,000 cubic feet per second.”

Kit Worley owns land on the San Gabriel River in Milam County and was invited to the meeting because he is having similar problems at his property. He introduced himself as an eighth-generation landowner, affected by similar circumstances due to his location downstream from Lake Granger, also managed by the Corps.

“I know we can’t turn back the hands of time, but there needs to be some sort of mitigation,” Worley said. “I hate to make the calculations on what’s been lost.”

He said losing riverfront property to erosion was like having land condemned to make way for a new highway.

Under eminent domain they have to make things right, Worley said. “I don’t know why we wouldn’t fall under that umbrella.”

Bell County landowner Sidney Kacir said researchers have extensively studied stream bank restoration. It’s nothing new. He planted Alamo switchgrass and grama grass along a washed-out riverbank at his pecan orchard. But after the vegetation had taken hold, water released from dams upstream submerged it.

“Once you totally immerse the vegetation for an extended period of time it kills it,” Kacir said.

Rodman, who works with the Corps division in Fort Worth, said he could look into changing when and how long they opened the floodgates. During the 2007 flood, releases reached 10,000 cubic feet per second, a rate that all parties agree causes significant erosion.

“The real critical problem – if it is coming from the way we make releases – we can look at alternatives,” Rodman said. “If we can cut back … increase flow discharge and put some breaks in there … maybe some plants can get oxygen.”

Rodman said there is a possible downside to this idea.

“But, are we going to flood some people with higher releases?”

Keeping the lakes at a lower level so they can catch more floodwater, and then be more slowly released, was not discussed. In fact, the trend has been in the opposite direction. Some lakes have added to their conservation level, including Lake Belton in 1973, to supply a thirsty state with more water to facilitate a mushrooming population.

With the urging of mediator Jonas Miller, discussion returned to stream bank restoration. Representing the Corps, Rodman said he would try to get experts from their waterways experiment station in Vicksburg, Miss., to make a trip to Texas to see if they could help.

Milam County Judge Frank Summers suggested someone should take charge and see the project through to fruition. He called for another, “bigger” meeting, which would include members of the Brazos River Authority.

“Whoever is going to be involved, needs to be involved,” Summers said. “So many times with these governmental agencies, the left hand doesn’t know what the right hand is doing.”

Judi Pearce, spokeswoman with the Brazos River Authority, said they were aware of the meeting, but not invited.

A few days after the meeting, a member of the Central Texas Stream Team visited Kacir’s organic pecan orchard on the Little River.

“You’re trying to slow down the water flow, the velocity, by creating a little more turbulence with those branches. The concept is catching that flow and redirecting it,” McAlister said.

But, the work would be for naught, if the river continues to run at a high level for prolonged periods.

“You need to stabilize the system. It’s policy first that needs to be addressed,” McAlister said. “Until they do that, all the stuff in the world will get washed out.”

Looking for a change, Kacir and two other landowners have written the Brazos G Water Planning Group this spring petitioning them to consider changes. They have suggested installing more pipelines, keeping the lake at a lower level and repairing damaged riverbanks. Two of their letters are posted on the Brazos G Web site.

After the meeting, Kacir, said he agreed with Kit Worley’s comments about eminent domain.

“We have both constitutional and statutory provisions when your property has been taken,” the Temple attorney said. “So many good things only happen after litigation. I hope it’s not necessary. We may have to get some senators and representatives who are willing to carry the ball to authorize the litigation.”

Regarding stream bank restoration, Kacir said he saw “a little spark of hope.”

Before dams on the Leon and Lampasas rivers were built, the erosion problem that landowners and officials are grappling with in Central Texas was addressed in the book, “The Flood Control Controversy.”

Sponsored by the Conservation Foundation, the book’s two authors seemed to have a crystal ball.

“In many locations the erection of dams may lead to severe erosion problems in the alluvial valleys below them, with the final result that much more bank protective work will have to be undertaken in the future than is anticipated at the present time.”